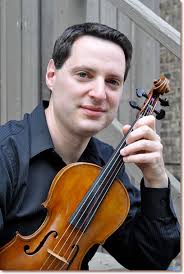 Ft. Wayne, Janus Ensemble, Reno Baroque Ensemble (NV), and the Bach Institute Players at Valparaiso University. He is principal second violin with the Haymarket Opera Company, and Baroque Orchestra of Colorado. In Chicago, he also plays with Ars Antigua and Music of the Baroque. In the summer, he performs at the Staunton Music Festival (VA) and Green Lake Festival of Music (WI). Other ensembles he has played with include Indianapolis Baroque Orchestra, Ensemble Galilei, Chicago Opera Theater, Central City Opera, Aradia, Toronto Consort, and numerous others across Canada and the U.S. Mr. Davids earned the prestigious Performer Diploma in Baroque violin from Indiana University where he studied with Stanley Ritchie. He also received a Masters degree from the University of Michigan.

Mr. Davids published a volume of arrangements for two violins of J. S. Bach’s solo violin fugues in early 2016. Called Bachfor2, it is the first arrangement of its kind. In addition, he is a third generation disciple of the YiZung Yue school of internal martial arts.

He is a founding member of the award winning electric Baroque ensemble Discontinuo and is in demand as an electric violinist. He has played on many world premieres of new works including David Borden’s K 216.01 for electric violin and synthesizer ensemble. A recognized expert in historical performance, Mr. Davids often gives masterclasses in performance practice and improvisation at many schools and universities including Northwestern, Cornell, and the University of Michigan. He performs on a Baroque violin by Ferdinando Alberti from 1750 with Baroque bows by Canadian master bow makers Michelle Speller and Stephen Marvin. A resident of Skokie, IL, he lives with his wife Julia, and children Judith and Solomon.